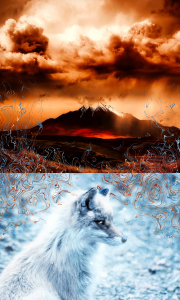 Today Zooscape has released my novelette, “Saga of The Knapaleith” into the wild! (It’s free to read on Zooscape Issue 4!) I had so much fun writing this. I had drawn on influences from Watership Down, the Icelandic language, and Norse mythology to build the world of these Arctic foxes in Viking-era Iceland, similar to how the rabbits in Watership Down had their own language and mythos.

Here is a glossary of Arctic fox terms:
Stokk – The leap that Arctic foxes make to pounce on prey buried in the snow.
Vaeli – Lemming. Derived from the Icelandic word for foods: matvaeli.
Knapa – Anything that carries a man on its back. Foxes use this term for both horses and boats, which carry men on land and sea, respectively.
Bjarr – A temporary state of terrible wrath and rage. A fox that goes bjarr is capable of incredible strength, but it doesn’t last long and the fox is left feeling weak and helpless as a kit. The human equivalent is “berserk.”
Solvirrk – Lightning, thought to be teeth of Ylirr and a sign of his wrath.
Merrk – Fox droppings. To “make merrk” is marking territory. “Bloody merrk” is a vulgar expression.
Leith – The den leader. Used as an honorific suffix.
Rowf – Dog.