The COVID-19 pandemic is sweeping through the world. Everyone is urged to stay home in order to contain the viral spread. Staying at home with classes suspended motivated me to get back into blogging. Enter a list of good movies to watch, think about, and take my mind off the stress, anxiety, and worry. To kick off my extended spring break, I watched Roman Holiday.

On the surface, it seems like precisely the movie you shouldn’t be watching while under quarantine. The lead female character, Princess Ann, played by the irresistibly charming and elegant Audrey Hepburn, does exactly what you should not be doing during quarantine: run away from the comforts of home to wander through a city with a handsome stranger. And not just any city, but Rome, of all places. Italy has become an epicenter of the COVID-19 pandemic. Why did I watch such a movie while I have to shut myself up at home? Why did I do this to myself?

Well, if you dig past the surface, there are valuable life lessons to be learned from this classic, wholesome romantic comedy, especially during this uncertain and troubling time.

–Enjoy life by taking delight in the littlest things.

Ann was a rebellious, curious, and naive princess who embarked on a meandering quest to explore life outside her sheltered, royal bubble. She chopped off at least 3/4 of her hair, puffed on a cigarette for the first time, zoomed through the streets of Rome on a vespa, went on a romantic dance by the river, and later dunked herself into that river. Even the simple, childish gesture of blowing off the paper wrapping of a straw made her giggle. Audrey Hepburn did an amazing job portraying a princess’s innocent and easily delighted approach to everything around her.

Ann’s straw moment reminds me of my own lunch table shenanigans 2 weeks ago. This was during my latest Disney World trip with my mom, sister, and sister’s boyfriend, just before the theme parks closed due to COVID-19 precautionary measures. While waiting for our lunch at a restaurant in Epcot France, I decided to pass the time by purposely, badly (I mean, really badly) pronouncing the French on the menu. It’s especially funny since my mom’s proficient in French and would say the correct words after every intentional mess-up of mine. My family and I hadn’t laughed that hard in a long time, especially after my dad passed away.

We go through life waiting for big things to happen so we have reason to celebrate. Let’s not forget that the little things are worth celebrating, too. A beautiful day, fresh air, reading a good book, watching a good movie, eating good food, listening to your favorite music, getting to be with people we care about…it could be anything.

Obviously, at this time, we can’t afford to go very far, but it’s through the confines of home that I can enjoy the company of my mom, who I had not seen in 2 months since we buried my dad. I had been out of state for school and had not been home since the funeral. I missed the French music my mom would play in the background during dinner. I missed her cooking. I missed being in my room and taking care of my axolotls. I missed the backyard lake view. Coming back home brought a flood of nostalgia and newfound appreciation for things I had taken for granted before my life turned upside down. The circumstances that brought me home, the change in school schedule due to COVID-19, isn’t something to rejoice over. There’s a novel virus afoot and people are suffering. Despite that, I try to find the good things in everything, and that good thing lately is the chance to be home when I had been away longing for it.

–Some of the best stories aren’t sold or exposed to the whole world.

Ann snuck out with no money and with no way to get around a strange city. That could’ve ended badly. She was very lucky to run into Joe Bradley: Gregory Peck’s character, a reporter for the American News Service. Joe could have exploited Ann’s cluelessness and made big bucks by selling the scoop of a lifetime: an exclusive interview with the princess, complete with pictures. He spent much of the movie building up to that, getting his photographer co-worker Irving to sneak in photos of Ann during her Roman “holiday.” He had the chance to get what he wanted and he could have seized it. He could’ve won the deal he made with his boss. But when faced with the choice, falling in love did him in. Joe chose to lose the deal. He didn’t sell the story he promised to get. He insisted to his confused boss and co-worker that there was no story. The truth is that there is a story, but it’s not meant for the whole world to see. It’s meant to be shared just with Ann. It’s a private, intimate exchange. The next day, during the princess’s interview with the press, Joe and Irving gave her the photos as mementos of her capers in Rome. Her response to Joe, and her last words in the movie: “So happy.” I was moved by that ending.

There’s something to be said about the value of untold and unsold stories. Yes, they do have value. It’s tempting as a writer to believe that a story isn’t valuable because it can’t sell. Of course, writers strive to earn money and readership by selling and publishing their work. And that’s great when it happens. But if it doesn’t, that’s okay, too. Some of my stories haven’t sold and published yet. Maybe they never will. And that’s okay. Some of those trunked stories have been the most fun to write, and it’s the fun I’ve had while writing that I’ll treasure. I try not to write a story while pinning all my hopes and plans on a certain end result, like getting it published to a certain market. I can’t control that. What I can do is enjoy the journey, in all its twists and turns.

–When your boyfriend for-a-day gets into a fistfight with the government agents, smash a guitar over an agent’s head.

I’m just kidding. Do not smash a guitar over the agent’s head when your boyfriend for-a-day gets into a fistfight with said agent. Now, if you want to safely parody this scene for a funny YouTube video, then feel free to do so. Laughter is the best medicine, they say. It boosts your immune system. (Huh, I suppose there is a lesson to learn here.) 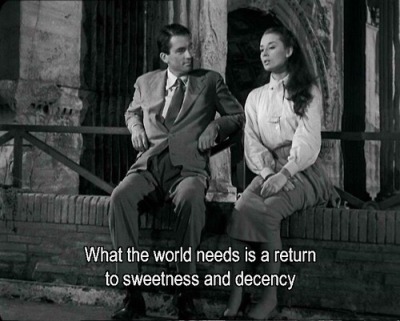 –Be the sweetness and decency that the world desperately needs.

Sure, Joe was being dodgy by not being upfront with Ann. He didn’t tip her until the end that he knew her true identity despite her bluffing, and didn’t admit what he had planned to do with his time with her. Otherwise, he had been an accommodating gentleman to Ann all the way through. We hear too many stories about men cruelly taking advantage of women with their predatory behavior. Ann’s runaway attempt could have ended terribly if Joe had been that kind of guy. Fortunately he wasn’t. He let Ann stay in his apartment when she had nowhere else to go, let her wear his pajamas, and let her use his bath without ever making an unwanted move on her. He went along with her whims and helped realize her wish to explore Rome. He never looked down at the way she was utterly enjoying her holiday. And most importantly, in the end, he chose not to sell out those precious memories for his own gain. Because falling in love with Ann, and seeing her being the happiest she had probably ever been in her life, was worth it.

The world needs more sweet, decent people like that. We need to look out for each other, help each other enjoy what life has to offer, and not step on other people to get what we want. That’s especially important while COVID-19 is upon us.

So that’s what I took away from Roman Holiday. Maybe I’m looking too much into it. Maybe it’s the effects of quarantine getting to me. Nevertheless, I hoped this made for an entertaining and enlightening read.